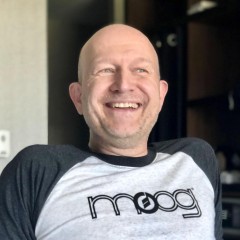 My experiences with (semi) modular synthesizers.

This is the American Tobacco Campus as seen through our hotel room window in Durham, NC. I took it on April 28, 2019 – the last day of this year's Moogfest.

This is the place where the Moogfest usually takes place. And this year marks the 15th time it took place – for the first time with me as a proud participant. 🙋‍♂️

It was a dream come true! And it wouldn't have been possible without my beloved wife Nancy!💑 Normally we don't travel alone and I would've felt terrible without her by my side flying to Durham. So we decided to have a few days just before the Moogfest together in lovely Wishington, D.C. and then drive down to North Carolina. Washington was so beautiful!

But that's another story and this one is about Moogfest. So, carrying on …

Should I stay or should I go?

It was a tough decision whether I should go or not and I was thinking hard about it for half a year. Mainly because such a journey is very expensive. One thing was clear: if I go I want to take part in the engineering workshop where you build an actual Moog synthesizer that's not for sale otherwise and you keep it for yourself. I'm tinkering with electronics, PCBs, breadboards, my soldering iron etc. quite often so this was a must. BUT … the engineering pass for Moogfest is around a thousand bucks! 😱 Plus: the flights, the hotel, the rental car, the food, … 💸 So this decision wasn't lightheartedly made but in the end we thought “ah, well, once in a lifetime!”

And so the plot thickened … 😂

The synth this year?!

However, when the folks at Moog finally lifted the secret of what this year's synth we build at the engineering workshop will be I was honestly a bit disappointed. Here's the corresponding tweet, starring the soon-to-be-built Spectravox and its creator & master mind Steve Dunnington:

I was disappointed because I'm not that much into vocoders. At least: I thought. I just discovered the Subharmonicon, Moog's 2018 Moogfest engineering workshop synth and was hoping to build something similar crazy (and with a sequencer) in 2019. Plus: 2019 marked the 15th incarnation of the fest – I was hoping for something special …
Btw, here's an excellent video by loopop (more to come below) explaining the Subharmonicon:

Well, the Spectravox doesn't have a sequencer but boy is it a crazy device! And now that I built it I know how to have fun with it even without using the microphone! You'll hear a bit later.

At the beginning of the workshop Steve Dunnington – I love the man so much! He's funny and brilliant and humble and nice and everything – intruduced this year's synth we all gonna build and presented some basics on the theory of Vocoders. And voders! Have you heard that term? I didn't. Turns out: the subject is quite interesting! So much so that later that evening, back in the hotel, I did a bit of web search and found the original articles by the inventor Homer Dudley in The Bell System Technical Journal Vol. XIX from October 1940! I tweeted this:

Fascinating stuff, the Voder and the Vocoder, invented by Homer Dudley in ~1939. https://t.co/rawsk5dfTo
Thanks so much to Steve Dunnington from @moogmusicinc for bringing this topic into my mind! 🙏🤗#moogfest #Spectravox
/cc @loopopmusic 😉 pic.twitter.com/2iNEPL6zyG

Now getting our hands wet and building the Spectravox was the most fun. The workshop lasts two half days. My slot started on the first festival day (Thursday) at 3pm and went on at Saturday 10am. Both sessions lasted four hours each. So our group was the first to finish the Spectravox1. 😏 Here are several photos documenting my build process and progress:

Every participant got his/her (yes, there were a few women, too! 👍) own little desktop amp so after building that thing trying it out was the thing to do.

Here are my first experiments with the Spectravox, immediately after I built it:

So, you can have fun with it even if you don't use the microphone. By the way: I got my lucky number 13 as the official serial number for my Spectravox – together with an autograph from genius Steve Dunnington:

Loopop was my desk buddy

I was so happy that I managed to get Ziv Eliraz – better known as loopop throughout the interwebs – by my side at my desk (1st row!) during that engineering workshop! Weeks in advance I asked him if he's going to go to the Moogfest and he could make it – thanks to his Patreons! We chose the same workshop slot (there are many!) and agreed to sit at the same desk when we met on location. I was so excited! Moogfest! Engineering Workshop! Steve Dunnington! Spectravox! AND meeting loopop for the first time by my side! 😱

Ziv is the master of synth gear reviews on YouTube – he just placed 2nd best music tech personalities in the world!! – and here's his video featuring the Spectravox with his very first experiments:

Later he did a detailed review from his hotel room in Durham:

Should you join the engineering workshop?

Building the Spectravox wasn't very hard. If you're reading this because you're asking yourself if you could successfully attend a Moogfest's engineering workshop I'd say: if you know the basics of soldering: yes! Steve and the few other Moog employees are very kind and patient. There's no one who couldn't finish his/her synth. So: do be brave! Join! It's an unforgettable experience! I'd love to do it every year – but it's expensive and I want so many things … like a Moog Matriarch. Or a Moog One!

Holy moly! Those two are fun and crazy machines!! The flagship Moog One was announced a bit in advance to the fest but the Matriarch came out just during this years fest. And I was happy to test both synths out. I already owned a Moog Grandmother but the Matriarch – although from the same family – is a whole other thing! It's complex and sounds like all Moog synths: awesome!
And, of course, here's loopop's review of the Matriarch:

And, for completeness, his review of the Moog One flagship. Well, thank you, Ziv, now I want one, too! 😂

There are so many workshops you can attend at a Moogfest. But selecting and booking them wasn't that easy. As soon as the web platform where you can book your place is online you already should know which ones to book. Because if you hesitate you're most certainly too late. The seats run out extremly fast.
So that's a learning for me as a first time participant. I didn't get into all the workshops I was interested in. But that was okay. There's still the exhibition with all the booths and the Moog popup factory. And lots of folks to meet and greet.

Speaking of folks: guess who I met and had a little chat with, too – Cuckoo:

He's such a nice and huble guy! I learned so much from him! Check out his awesome YouTube channel, his Twitter account and his Patreon page.

Oh, and here's another guy I spotted while browsing through the booths. Do you know him?

Yes, that's indeed Martin Gore from Depeche Mode! Crazy! Martin received the 2019 Moog Innovation Award and this, too, ws captured on video by somebody:

And when I first met Ziv at the booths he also introduced me to Ricky Martinez. Honestly, I didn't know Ricky and his YouTube channel back then but over the laste several months after the Moogfest now I became a fan and subscriber. His videos are inspiring and calm and I like them very much. be sure to check them out! It was also very nice talking with him. He's cool. 😎

One of the workshops I was able to attend was held by MylarMelodies, another big name in the scene. So I met him, too! The workshop was about the lovable Moog Mother-32 and DFAM machines and how he uses them, especially when performing live. Very good insights and very inspiring workshop, too! I totally recommend his YouTube channel and his podcast “why we bleep”! (Here's my blog post about synth podcasts, btw.). Also, check out his Patreon page!

Well, the Moogfest is a festival celebrating the people, the technology and the music those people make with the technology. So, obviously, there are loads of concerts taking place during Moogfest. However, I didn't attend a single one this year. Remember? I was there with my wife and of course we wanted to spend time together, too! So maybe next time …

Moogfest on Hold to Focus on the Future

Moogfest 2020, originally planned for April 16-19, 2020 in Durham, NC, has been cancelled for logistical reasons. Please visit https://t.co/VHhjwn90ah for more info.

Thank you for your support, understanding, and patience. pic.twitter.com/TnZOJDaDsb

The official statement behind the link reads:

Although the official Moogfest website still says “See you again in 2020”:

Well, the (non-Moog-) folks I talked to about this guess there's no Moogfest at all in 2020. That's very sad, of course. But on the bright side: it saves me money plus I'm even more happy & lucky that I've been a part of Moogfest 2019 (the last one?). It was truly a lifetime experience and I will never ever forget! I'm so happy that I was there and met all these inspiring and nice people and that I still email with Steve Dunnington every once in a while! 🤗